- June 17, 2008
After my perhaps dry and certainly unillustrated description of the last week, here is an entry to make up for that! I again visited the Marché de la Bastille on Sunday. I believe it is open every Sunday and Thursday, so perhaps I will also try to visit on Thursday this week because I just love it. So here is a very illustrated, small example of what you can find at the market:

Of course, there are dozens of vendors with produce. Most either specialize in vegetables: 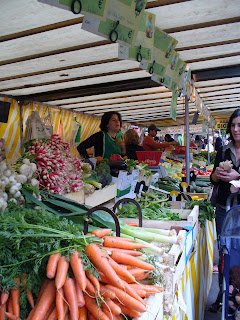 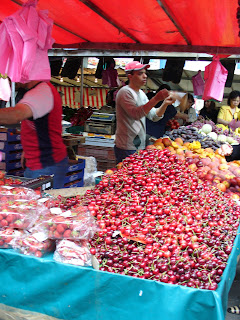 You can tell strawberries are going out of season, and cherries are at their peak! Suddenly, strawberries are much harder to find than a few weeks ago, and more expensive. Cherries at the market were again at amazing prices. At the supermarkets, finding cherries for under 6E/kilo is a steal, but at the market they are about 2,5 E/kilo! I got a half kilo of cherries, a half kilo of strawberries, and 4 large, delicious peaches from the vendor seen above, from this great man: 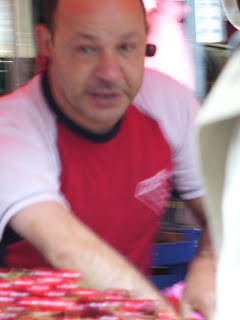 It was hard to take a good picture because 1. I was trying to be surreptitious and 2. he was always moving! But note the cherries over his ear. I call him wonderful because after I bought my cherries and peaches, he put more cherries and another peach in the bag. No such luck with the strawberries only because they were already packaged in boxes with plastic wrap.

The market also has produce that I must presume is not so locally grown... 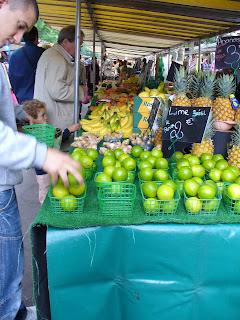 A lot of places list produce coming from different locations - often different European countries - as being different prices. Something that has surprised me, that is seems different to me from the States, is the fact that the French produce is often the most expensive! I would expect, what with a shorter travel and no foreign tariffs (although maybe that is the different and there are no foreign tariffs here) the French produce would be cheaper. But then again maybe it is also that French consumers are more likely to support their fellow countrymen, even at a higher price.

There are also many flower vendors: 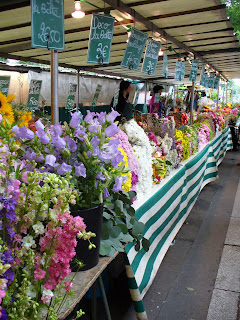 And more specific foods - here is a vendor devoted entirely to different kinds of honey: 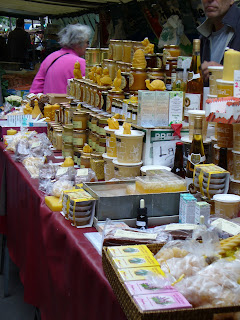 And there are many vendors who sell nothing but cheeses : 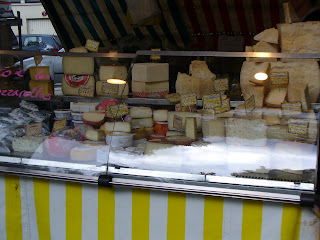 There are also plenty of poissoniers, with all of the fruits de la mer: 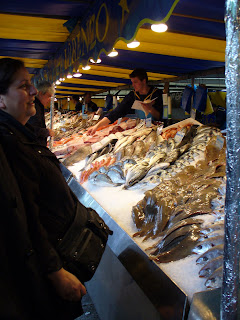 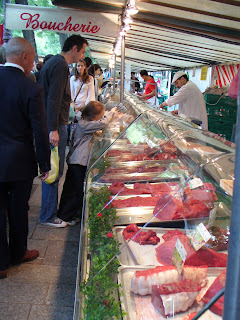 And vendors of volaille (poultry... Note that the two halves of that word mean fly (vol) and wing (aille)... perhaps a more fitting name than ours, which I can only assume comes from the French "poulet," chicken... But then, the French also eat a much greater variety of volaille than we Americans do, what with their pigeons and ducklings and all...): 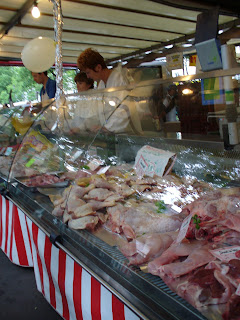 I am sorry that this picture is unclear as well, but here is another great sight - all of these chickens roasting, rotisserie-style : 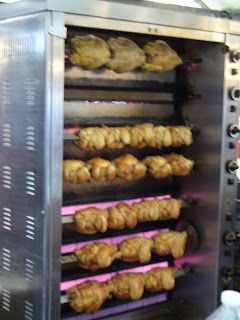 That was certainly a beautiful sight.
There are also a few stands with more specialty foods.
Here is one with mushrooms, ginger root, dried apricots and figs..... 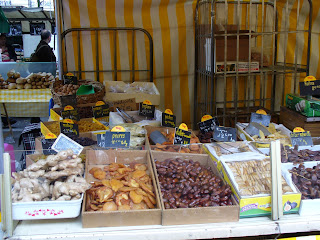 And at the other end of the stand, more kinds of olives than I know how to differentiate: 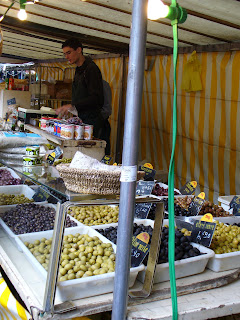 Here's something I'm pretty sure you will only find in France - an entire stand devoted to... 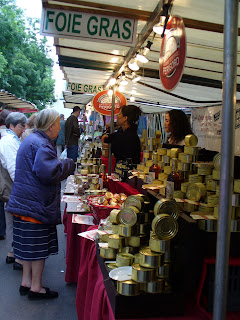 There were also quite a number of vendors selling already prepared food. There was one in particular, that I did not get a picture of, making falafels that smelled almost irresistible - I only say almost because I didn't want to ruin my appetite for the rest of my culinary plans for the day. Here is another such vendor, selling food ready to be eaten: 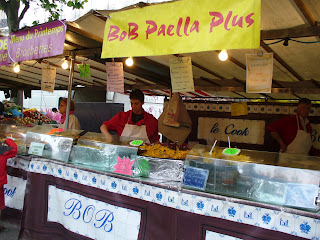 And of course, what market would be complete without an obligatory creperie or two? 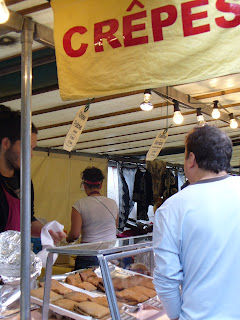 Beyond all of the delicious delectable dishes, there were also a lot of vendors with clothing and shoes and this lovely item: 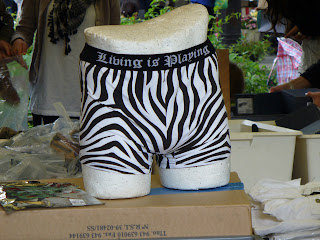 Now I know I have shown you this column a few times already, but I just loved the lighting on Sunday - it really captured the gold both of the sculpture at the top but also the inscriptions along the column, so I just love this photograph: 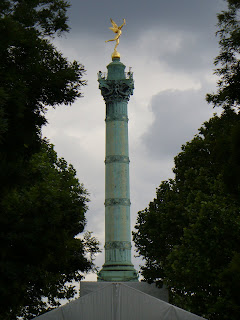 I don't really understand why my rantings about bad royales would make someone hungry, but I hope this little look into the fair has sparked your appetite for good fresh food! I for one am lucky because it is Tuesday, and I can hear Catherine in the kitchen just down the hall, making dinner... I would have asked if I could help, but I definitely have a cold, with a runny nose all day long, and I would feel bad putting my dirty hands into food I was preparing for others...

I need orange said…
Mmm, all the fresh fruits and veg.....

My plan was that we would go to the farmers' market tomorrow morning, but your dad has to go to the dentist, so anything we bought would be sitting in the car for an hour and a half or two. Not good. I should go try the market I think they have by Zingerman's roadhouse on Thursday nights......