Saturday I worked in the morning, just 11-1:30. One thing I really appreciate about my stage (internship) is the fact that I really feel like I am getting a good understanding of what is required in running a galerie. Eric is just taking on a new artist, who will be having an exposition (exhibition) at the galerie either in November or next January. For this new artist, I am creating his CV for the galerie's records, and Eric asked me to attempt a resumé of his oeuvre! I have met collectors and artists and dealt with transporters both in person and on the phone (I called China the other day - no big deal.) The scariest part of the job is without a doubt when I am the only one in the office, or when Eric is there as well but preoccupied, and the phone rings. Trying to follow French is a difficult enough task in person, and over the phone I am happy if I catch half of what they say. I have, however, learned to recite "Monsier Mircher est indisponible en ce moment, mais si vous voulez me donner votre numéro de téléphone il peut vous rappeler" (Mr. Mircher is unavailable right now, but if you would like to leave your number he can call you back later.) After which, inevitably, I have to ask them to recite the number more slowly (numbers are one of the hardest parts to process, I think, because they are just so set in your mind - 96, for example, is just so clearly "ninety-six," and not "quatre-vingt-seize," or, so to speak, four-twenties sixteen). But (after this minor digression) other than answering the phone I am really getting a good feel of what is required of a gallerist - it is not an easy job trying to keep so many different people happy and balanced!

After work, I rushed across the city to the 6e for an atelier de photo, a photo workshop run by Isabelle, one of the women who works for the BU program. Isabelle is a professional photographer, and after spending a few hours with her I have a much greater appreciation for how much careful consideration good photography really requires! I do feel like she explained a lot about how to take a good shot - how to consider the background, and the angle of the shot, in order to get the best picture.
Here are some of my favorite photos of the day: 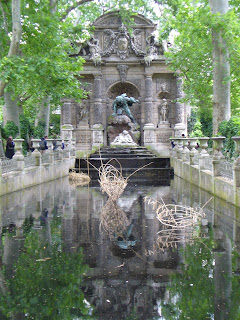 We went to the jardins du Luxembourg, a beautiful garden in the 6e arrondisement. This fountain was commissioned by Marie de Medici, wife of King Henry the somethingth. I love the reflection in the water. 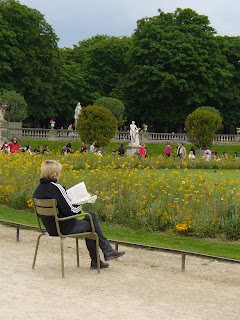 As this woman has discovered, these gardens are a wonderful place to read, or do homework... There are chairs throughout, so you can relax on your own or with friends and enjoy a peaceful repose. 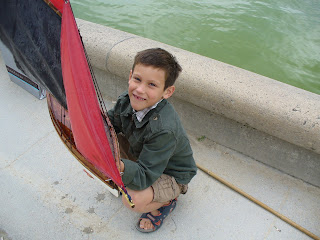 There is a huge (I mean HUGE, like dozens of meters across) fountain in the middle of the park, and for children you can rent a little boat like the one this boy is holding (we are looking at the red and black sails of a pirate ship.) This boy had just finished retrieving the his boat with the help of the long stick seen behind him (also from the rental place). He was certainly not posing for me, about a half a second after this picture was taken he was hiding behind the sails. However, this picture happened to turn out just perfectly... Although I do feel like a bit of a creep taking pictures of some random boy. But I took quite a series of photos of him, during which Isabelle helped me figure out where to stand and how to point my camera to avoid superfluous details and really get the clear shot I intended. 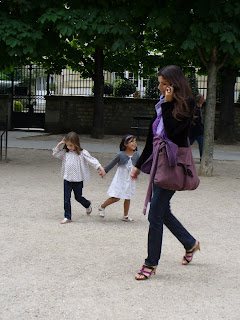 I love this picture too. Also not staged, I love the little girls playing in the background. Mom, here is another example of clear Parisien attire. 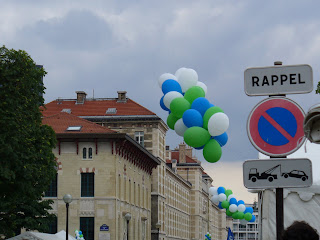 There was some kind of festival going on in the street that I believe was just south of the gardens - there were all sorts of bike safety booths, and a band walking up and down the street, and lots of people... And these balloons, flying out over the city.

After passing through the gardens, we passed by the photography exhibit that was featured along the outside gates of the gardens. There were some absolutely incredible pictures - both breathtaking and, at times, heartbreaking. After an hour or so of really considering what goes into trying to get a great picture, it was pretty incredible to see what a lot of photographers have been able to accomplish. I definitely have a whole new appreciation for the art.

Between taking our photos and visiting the exhibit, we took a short repose (rest) in a nearby café. Isabelle asked me what my favorite place was in Paris, and when I had no idea how to answer, she changed the question to what would I most remember about Paris in 10 years. Oh well that's easy, what do I always remember from trips - the food! I had brought my new patisserie guide as metro reading, and so I took it out to show her, and she was thrilled. She flipped through, making comments like "OH, their honey is my absolute favorite but I don't think they are open any more; they have the best hot chocolate in the world (and she, like me, remembers food... And hot chocolate is her absolute favorite, so she would know); oh you have to try ___ here..." It was great! There was one shop pretty nearby, Pierre Hermé, who, as I learned that day, is something of a celebrity in Paris for his unbelievable sweets. So after the exhibition, we decided to make a quick visit to his shop for one of his specialties - the macaron.

Macarons are all over Paris, and I can believe they could be done very poorly, so as to be dry and wafer-like, but Pierre Hermé's... I can't even describe. A little pricey, perhaps - I paid 5,50 Euros for 3 cookies that were perhaps each 1.5 " across and maybe 1" tall, but so completely worth it. On a Saturday afternoon, Pierre is certainly popular enough - here is the line to get into his tiny shop! 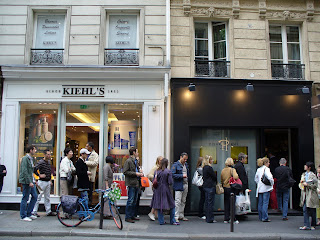 These people were right to wait in line too.

Ok, here is one of my absolute favorite photos that I have taken from all of Paris: 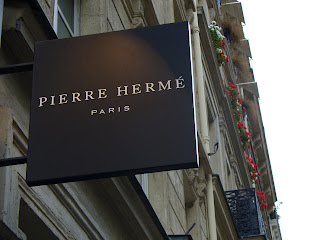 The little shop sign for such a Paris icon, with the red windowbox flowers in the background - I can't even explain how Paris this is.

We moved through the line pretty quickly - we probably finished our purchases within 20 minutes. I did not take photos inside the shop, but let me tell you, it is a treat for the eyes as well as the mouth!! All the pastries are absolutely beautiful, and make your mouth water like no other.

One of the wonderful things about Paris is the affinity for flavor. Shops are always trying to come up with new flavors and to outdo each other with the exotic mix of flavors. Pierre Hermé offered macarons in flavors like Pamplemousse (grapefruit), Abricot et Pistache (apricot and pistachio), and Huile d'olive et vanille (which, unfortunately, is a winter flavor, because my guidebook specifically recommended that unusual flavor combination!). They also have much more traditional flavors like chocolate, caramel, and "infiniment vanille" which mixes vanillas from Tahiti, Mexico, and Madagascar. I chose three - rose, jasmine, and passionfruit & milk chocolate. Jasmine was unlike anything I have tasted before, and the flavors for the passion fruit and chocolate macaron was such an unbelievable, subtle play between the two flavors - the first taste was really the amazing, airy texture (I swear it was like eating a cloud), and then passion fruit spread throughout my mouth, followed by an incredible chocolate. But I think my favorite flavor was rose, for which the cream in the middle is flavored with rose petals. It was like a symphony in my mouth... there are really no words to describe the light, melt in your mouth, subtle smooth flavors. I can't attempt it. But if you ever visit Paris - GO TO PIERRE HERME, 72 rue Bonaparte 75006.

As we left that unbelievable experiènce de dégustation and walked to the metro, we came across this, um, work of art? I don't know what it is, but it was so cool - suddenly, the sidewalk springs up out of the ground, as though something had been steaming underneath and the steam had pushed on the ground until it was forced to spring upwards. Just to the left of this image, across the street, is the Café des deux Magots, who has served the likes of Oscar Wilde, André Breton, and Guillaume Apollinaire... Although I hear the café today is more renouned for its former patrons than its cuisine... 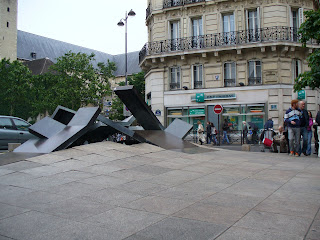 After I got home, I called my roommate Kate on skype and we talked for about 45 minutes which was wonderful - we talk at least daily during the school year, so after three weeks with just a few emails back and forth (granted they were, for the most part, very long emails) it was so good to really get to talk!

So voila, Saturday. Hopefully Sunday and Monday will come soon!

I need orange said…
How cool that you got to get personal attention from a professional photographer! Love the pics you took. It does make a difference to be thinking about composition, etc. A lovely thing about digital is the ability to take essentially the same pic from slightly different viewpoints.... I almost always like one better than the others. (NOt to mention the ability to take a few of exactly the same view, to make it more likely that at least one is very sharp!)

I really like the way you are taking pics not just of the monuments, but also of the street scenes.... Thinking that the market, with all those Spanish strawberries, flowers, etc, would be another likely subject..... ;-)

Jen said…
Haha.. I loved your picture of Parisian fashion--so so true.