Following our morning of omelets and marketing and potatoes, it was time to cross off a few major tourist destinations from our Paris to-do list.  As it was the first Sunday of the month, and the first Sunday in Paris means free admission to any and all museums (not a bad deal for a city that has thirty-some art museums alone), our first stop was to check out the line at the d'Orsay.  The museum, which boasts an outstanding collection of late 19th century works, is housed in a mid-nineteenth century former train station, right on the banks of the Seine.  In 2008 it stole my heart with its wonderful room full of Cézannes.  But alas, the line was outrageously long, and as we did not feel like waiting only to get into an overcrowded museum, we decided to try our luck elsewhere.

We popped across the river to see I. M. Pei's pyramids in the Louvre courtyard, but as expected, the line here, too, was far to ridiculously long to actually venture a visit inside.  We did, however, admire the stately Place de la Concorde on our way back to rive gauche. 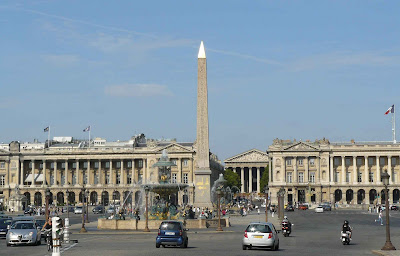 Following our initial thwarted attempts at visiting a museum, we continued along the quais beside the river toward a museum I hadn't visited, but one I had taken much notice of in 2008: the Musée du Quai Branly, which houses so-called "primative" arts; that is to say, art not in the Western European tradition.  Happily, we found it to be without line and not too crowded.  But more on that momentarily - it was a beautiful day, and we appreciated the lovely weather as we made our way across the city.  On our way, we found a group of men playing bike polo, in front of les Invalides.

Oh Paris, this is why I love you.  You never fail to surprise and intrigue me at every turn.

Finally, we reached our destination.  The museum had first caught my attention with its singular facade: 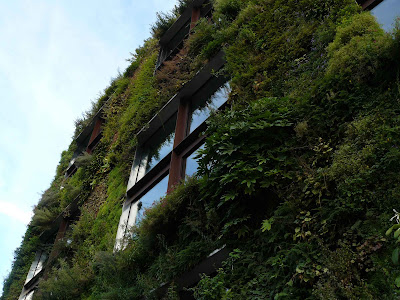 The plants growing directly out of the exterior walls have nothing to do with the collection, at least so far as I can tell.  Said collection is kind of a strange hodgepodge of arts from around the world, with displays devoted to works from south and central Asia (though not the far east, like China or Japan), sub-Saharan Africa, the Pacific Islands, pre-Columbian America (and works by Native Americans, post-Columbus), and Australia.  It seemed somewhat offensive to me that, in a city with so many dozens of art museums, all these widely disparate arts were lumped together as "primitive" and housed together in one building, especially with such a wide variety of subject matter - as though this were the museum of "uncivilized, non-western, brown-people art."  One particularly strange display case held a collection of artifacts from around the Americas, ranging geographically from Canada to Peru, and dating from several different centuries.  The information panel next to the display explained how you could see the "unity" across the two continents.  Really?  I mean, really?  As in, the totem poles of the Pacific northwest are comparable to giant stone heads of the Olmec in Mexico, which are in turn comparable to  the Mayan codices from the Yucatan or the Incan textiles in Peru?  I would say they are as similar as Italian Renaissance frescoes are to the French Impressionistic works that feature so prominently in Parisian museums (the d'Orsay, the Orangerie, the Marmottan-Monet - just to name a few) - and those are considerably closer together in time and location.  But I digress.

After seeing as much of the strange and varied collection as we cared to see, we headed out to make one last visit before heading back to the hotel.  The Musée du Quai Branly is just a hop, skip, and a jump away from the Eiffel tower, which looms over the neighborhood. 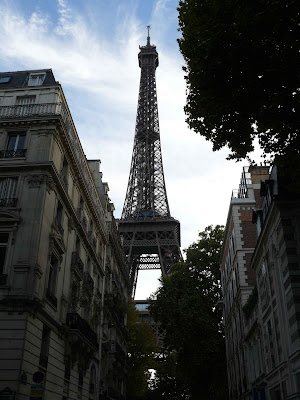 My mom was drawn to the tower like a moth to a flame (only without the imminent death part), and we couldn't very well leave before walking beneath it and then stopping down the street to get a café.  It was overpriced and underwhelming, as far as coffee goes, but we were paying for the scenery, after all.  Finally, we caught the métro and headed back to the hotel for a light dinner of fruit, bread, and brie, all picked up at the market that morning.

The next morning we woke up refreshed and ready for another day of touristy activities.  After taking the métro downtown to Hôtel de Ville, we paused briefly for un express before continuing on our way.  And before I continue on my way now, a brief aside: as any Paris native will tell you, to not sound like a tourist in Paris, you should order your coffee by asking for "un express:" a shortened version of espresso.  I learned - slowly, I might say - that this is not how one orders coffee in the rest of France.  When I asked for un express in Dijon, or Bordeaux, or Tours, the waiter's invariable response was "un espresso," to make sure he understood me correctly.  I would have done better to simply ask for un café.  How pleasant to finally be appropriate in my use of vernacular in Paris!

After our express, we headed across the river to the Ile de la Cité. 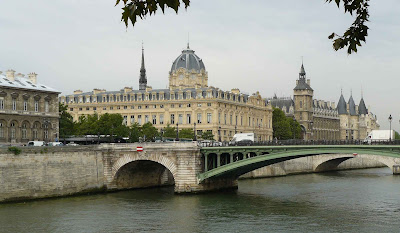 We passed by Notre Dame briefly.  In 2008, I waited in a long line to ascend the towers, but I don't remember ever seeing a line just to get inside the front doors.  Good thing we didn't care to poke our noses inside on this occasion, because it would have been quite a wait: 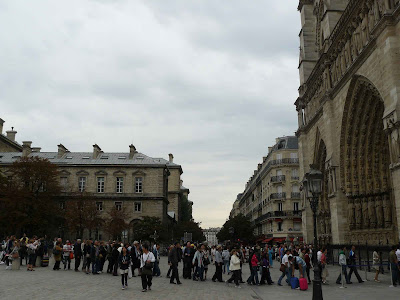 But the gardens around to the side of the cathedral are at least as pretty as the stained glass windows inside. 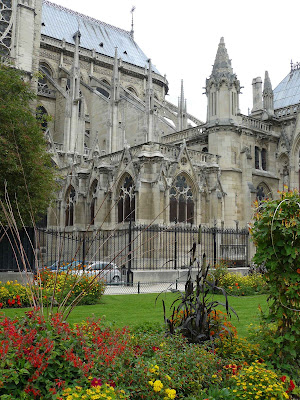 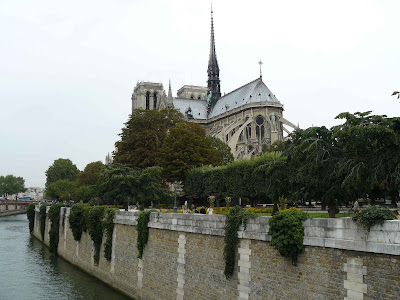 From there, we crossed the Seine again, now to rive gauche.  As we passed over the Pont de l'Archevêché, we were struck by the hundreds of padlocks festooning the railing: 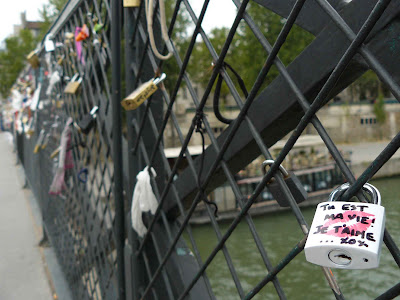 The nearest, legible lock reads, you are my life! I love you ... xox

It's not just photographers who are inspired by the famous cathedral; we saw a number of sketchers, and a painter or two, poised along the quai to capture the cathedral on paper. 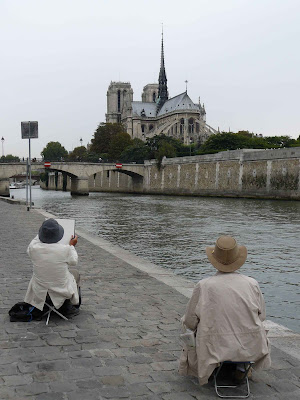 Leaving the cathedral behind us, we passed over to Ile St-Louis, walking the length of the island, poking our heads into paper shops and under awnings to read menus.  Slowly, as the gray skies began to shed a gentle sprinkling of rain, we made our way back to rue des Rosiers for lunch at an old favorite, le Loir dans la Théière.  The homey, homely interior is filled with mismatched furniture, the walls plastered with layer upon layer of posters for local happenings.  It's the kind of place where a customer will plug in their iPod to charge in the outlet by the dessert buffet; where chihuahuas are charioted to their lunch table in a rolling backpack. 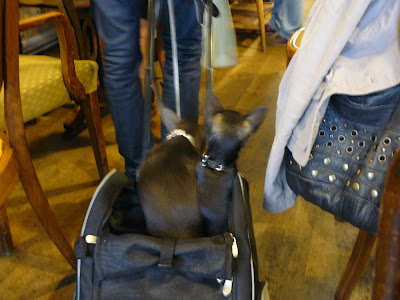 How I love it here.  Oh, and the food's pretty fantastic, too, by the way.  I think they have a menu they hand out, but as I always order off of their chalkboard list of daily tarts, I don't recall.  On this occasion, I recommended to my mom the tarte salée aux oignons rouges et tomates: 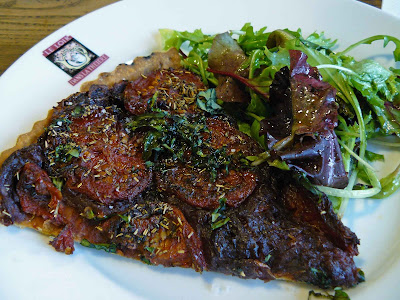 The oven-roasted tomatoes are piled atop a thick bed of sweet, nearly creamy caramelized red onions and sprinkled with a dusting of dried rosemary.  The tomatoes bring a little acidity to the sweetness of the onion, while the rosemary brings a little fresh earthiness.  Oh, and then it's all served on a delicate, crisp pie crust.  Heaven on a plate.

I went with the tarte aux échalottes et chèvre: 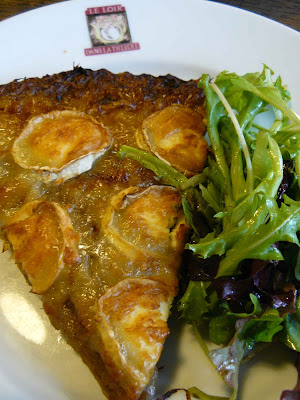 As with the red onions, the shallots were well caramelized, golden and sweet, almost as thick and succulent as a compote.  The goat cheese had been aged for perhaps a couple of weeks and had a superb, crumbly texture.  It added a little tang to the sweetness of the shallots.  It was good, but I found the balance of the tomato's acidity from the other tart lacking in this one - it could have used a little bite.

The best part of any meal at le Loir, though, is the dessert buffet, which always promises a variety of succulent offerings.  We chose two: one, a clafoutis with mirabelles, which, I am sorry to say I did not photograph.  It was soft and light, the delicate custard heady with vanilla and citrus, surrounding pockets of juicy, sweet, whole mirabelle plums.  The second was a tarte aux pêches de vigne et romarin: 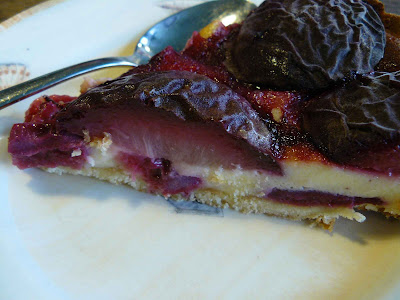 Pêche de vigne translates as vine peach, though it grows on trees like all other peaches.  It is a specific variety of peach boasting a dark, nearly purple skin and white flesh.  Romarin is rosemary.  The tarte had a thin layer of pastry cream over a perfectly crumbly pâte sucré, topped with enormous slices of juicy, purple peaches, with a little rosemary sprinkled over everything.  The herbaceous rosemary was a fantastic foil to the sweet-tart peach and the tender custard.  Miam.

After sufficiently oohing and ahhing and sighing over a perfect lunch, we hopped onto the metro again, this time to head to the opposite end of town.  Though I did my fair share of touristing my last first in Paris, one essential I never visited was the Arc de Triomphe, and I didn't mean to miss it again. 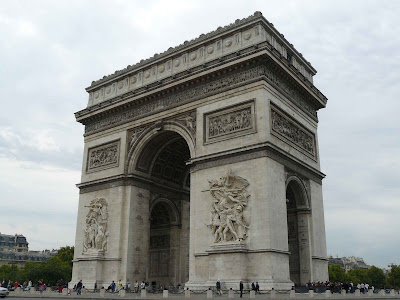 After a few confused moments of wondering how, exactly, one is supposed to cross eight lanes of roundabout traffic to reach the arch (answer: sneaky underground tunnel), we made our way under the impressive structure. 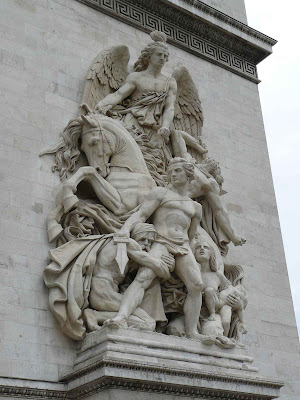 When Haussmann redesigned Paris in the mid-nineteenth century, he did it with an eye to creating impressive vistas down long boulevards.  The métro stop for the arch is called "étoile," which means star, a reference to the eight streets extending away from the arch like spokes on a wheel, creating eight impressive down-the-street views of the arch from different angles all over the city.  The front and back facades of the arch are also carefully arranged.  To one side, it faces la Défense, a business district just northeast of Paris. 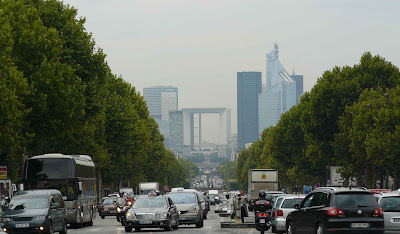 In the opposite direction stretches the fabled Champs Elysées, arguably the most famous street in the world, which stretches from the arch all the way down to Place de la Concorde, and beyond that, the Tuileries and the Louvre. 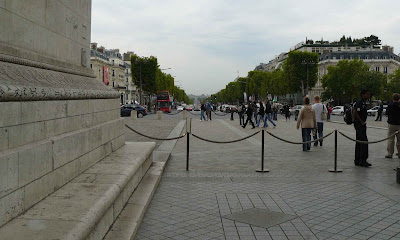 After a few minutes under the arch, we began our stroll down the Champs Elysées, since, as we all know,

(In the sunshine or the rain, at noon or midnight, there's everything you want on the Champs Elysées)

And it's probably true, too - the wide avenue is lined with shop after pricey shop.  You could find just about anything there - if you're feeling particularly solvent. 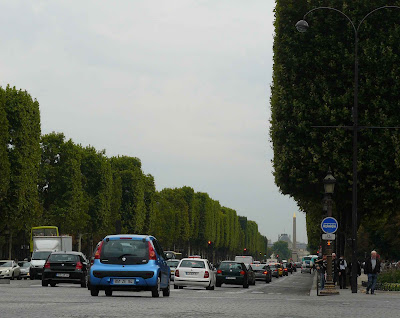 Having reached again the golden-tipped obelisk where this post began, I will finish for now.

I need orange said…
When are we going back? I want to go inside the Musee d'Orsay, I want to eat more clafoutis, I want to ride the elevator up la Defense, and maybe even ride one up la Tour Eiffel!
April 1, 2011 at 11:15 PM