Paris II: a-marketing we shall go

Happy Sunday morning!  We woke up early to get an early start on walking down to my beloved marché de la Bastille.  It's a good hike from our hotel, just off of Place de la Nation.  When we started on our way, I was struck by how autumnal the city felt.  In 2008, I was in Paris only for the summer - seeing the leaves on the trees any color but green felt bizarre in a city that is, in my mind, eternally in summer. On the way to la Bastille, we got distracted by rue d'Aligre, which boasts its own market with a bounty of produce.  We ogled enormous, bright orange wedges of potiron, a cousin of the pumpkin, and piles of thousands of golden-yellow fresh dates.  There's a covered market just off of rue d'Aligre, too, boasting prepared foods and vibrant flowers. 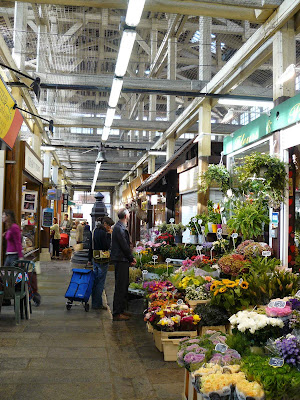 But we had a ways to go yet, and didn't want to pick up any extra weight to carry with us, so after thoroughly poking around the place, we didn't get anything at the marché d'Aligre.  We were holding out for this: 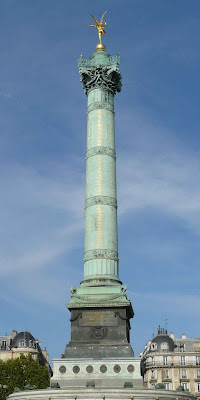 I'm sure you're tired of pictures of the colonne de Juillet in the Place de la Bastille by now, but I can't help it.  There's just something about the blue skies and the gracious, golden, glittering gleams* of the winged figure and the text that sets my heart a-flutter.  Seeing the column brings back so many memories, and though I've fairly well gotten over my urge to photograph, say, the Eiffel tower every time I pass it, it's nearly impossible for me to walk past the column without wanting to snap a quick shot or two.

Having reached our destination, we put off visiting the market in favor of some brunch.  We sat down on the terrace of Café Français with a lovely view of the column and the Place to grab a bite to eat.  I was planning on a pastry of some sort when a waiter walked by carrying a tray loaded with omelets and salads to a nearby table.  That settled it; I needed an omelette au jambon: 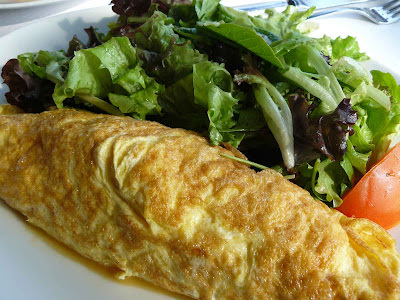 The French are no strangers to eggs, what with their custards and flans and quiches and omelets.  But what might surprise an American is that eggs are decidedly not breakfast food in France.  Breakfast is nearly always some variation on a tartine - usually day-old bread with butter and jam - or a pastry, like a croissant.  Omelets are lunch or dinner fare - but never breakfast.  After a month of trying to (mostly) eat authentically French meals, having a brunch-time ham omelet felt deliciously illicit - probably mostly because it was so delicious.  The omelet was cooked perfectly - creamy and toothsome and just what I needed.  The salad was lovely, too, with a beautiful mix of fresh greens and a refreshing, bright vinaigrette.

Finally, with full, happy bellies, we headed into the marché to do some serious shopping.  I was not disappointed. 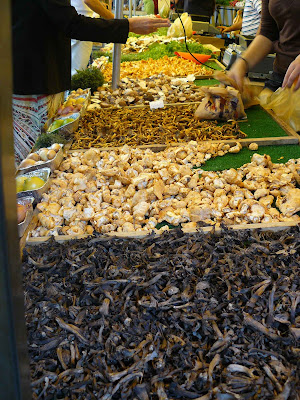 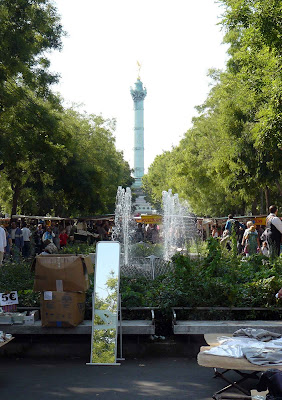 The selection at the marché was outstanding as usual.  We got some reine de reinettes and mirabelles, carrots, nectarines, a baguette, a small wedge of Brie de Meaux, and some roasted potatoes: 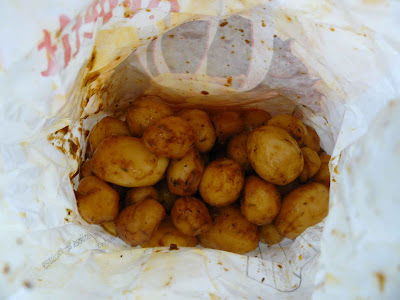 Ooh là là. If you are an extremely observant reader of this blog, and you are blessed with an outstanding memory, you may recall that in 2008 I posted a video of one of the many rotisserie chicken ovens at the market.  The chickens spin and roast and become impossibly delicious, and invariably, the bottom of the oven is covered in a thick layer of small, peeled potatoes, which catch the drippings of fat and juice as the chickens slowly spin and cook.  The resulting potatoes can be bought - and cheaply, I might add - by the kilo, and they are impossibly delicious, heady with rich, succulent chicken fat, and greasy in the best possible way.  These potatoes are utter perfection when hot and fresh, but make sure you've got a napkin - or, better yet, a sink - handy when you eat them.

I was also pleased to notice that the front page of Le Monde, a paper that is to Paris what the New York Times is to NYC, featured an article on the protests I had happened upon the day before: 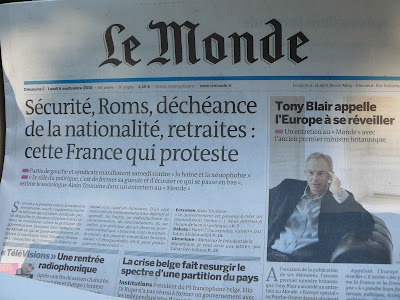 The headline reads, "Security, Roma people, decline of nationality, retirement: this is the France in protest."  I would have done well to read the first sentence of the article as well, which announces, "Saturday September 4 against hate and xenophobia, Tuesday September 7 against the retirement reform: labor unions, the Left-wing political parties, and several dozen other associations are rallying against the politics of the government."  But alas, I took my photo of the front page without any idea that there might be more strikes to come.  That, however, is a story for another day.

Successfully loaded with fresh produce and potatoes, we hopped on the metro to head back to the hotel and drop off our goods.  I love the Bastille metro stop; when waiting for the 1 line, the stop is open to the Place, and the column peeks out over the tracks. 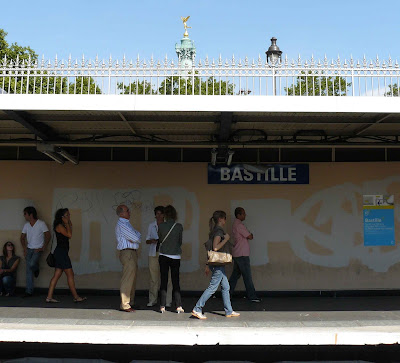 Also visible from the stop is the modern, glass-faced Bastille opera house: 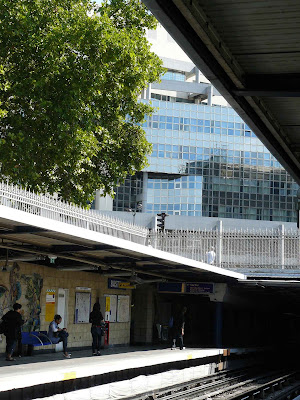 From Bastille, it's just a few quick stops to Nation, where we dropped off our food and scarfed down our potatoes.  But we didn't linger; since it was the first Sunday of the month, admission to all the museums in town was free, and we meant to take advantage of this fact and be thoroughly touristy for the afternoon.  But that, too, will have to wait for another post.

Coming soon: a basic tourist's guide to Paris in 24 hours: museums, churches, and the best savory tart you'll ever taste.

*Thank you, William Shakespeare (see Pyramus, near the end)