We had thought we might head up to Rouen for the day, and took the metro across town to the Gare Saint-Lazare (one of Paris' many train stations) with this aim, only to arrive about 10 minutes too late to make the train - perhaps we shouldn't have stopped for un express along the way?  I was still feeling somewhat downcast, partly left over from my realizations from the day before that Paris wasn't "mine" the way it had been before, and partly from knowing that my trip would be ending in a few short days.  Missing the train sent me over the edge for a minute... but only a minute.  We were in Paris, after all!  Who cares about stinking Rouen, especially when we could go tomorrow instead and here in Paris, McDonald's looks like this: 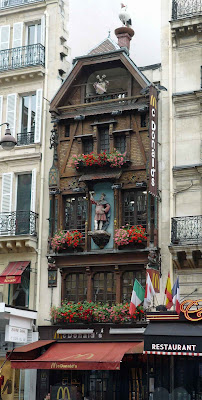 Seems to me this ought to be a Burger King instead, but given that I wouldn't eat any brand of American fast food in Europe, I suppose the point is moot.

Gare Saint-Lazare is right on the edge of the 8th and 9th arrondissements, near l'Opéra and home to the most famous of les Grands Magasins, including Printemps: 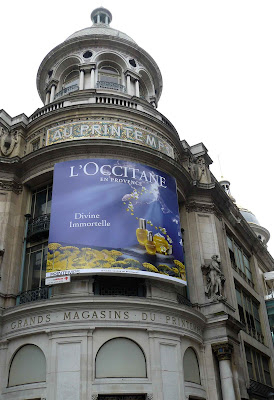 We ducked our heads in all the big shops, just to have a look at the overpriced goods and, in the Galeries Lafayettes, the stunning architecture.  We also stopped in some shopping venues that weren't quite as fancy, like the passage Havre, which boasted a charming little park in the middle of the city and the mall. 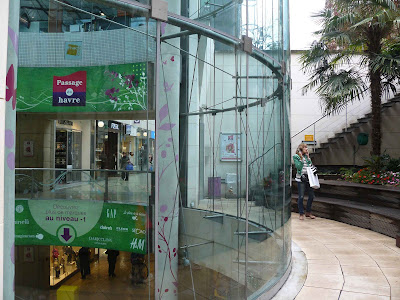 It had been raining overnight and the benches were soaked, so when we paused in the park to eat our baguette, picked up from Kayser that morning, we didn't sit. 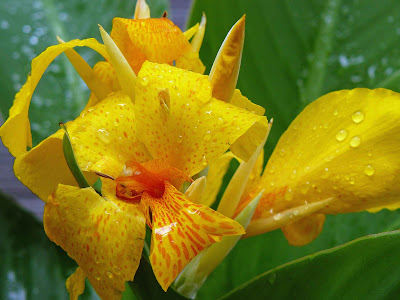 After our snack, we ducked in a Pimkie (a chain clothing store found across France), where we did in fact make a few purchases.  I'm not sure when the last time was my mom and I went clothing shopping together... maybe ten years ago, so we were long overdue.  We had fun, with me trying on some ridiculous long dresses and an adorable skirt that I ended up getting (thanks Mom!).  My mom was so swept up in the excitement of the Paris fashion world that she even bought herself a scarf or two, and I'm confident that one day soon she'll wear one of them.

Having sufficiently shopped, it was time for a little more sight seeing, so we walked down to see l'Opéra. 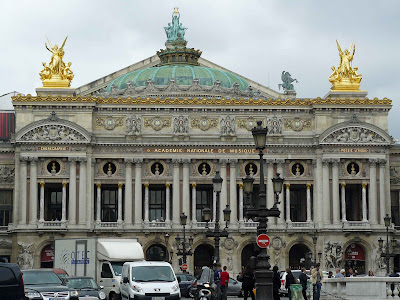 By now it was probably around 1 pm, and the stately steps were momentarily home to a crowd of lunching young professionals. 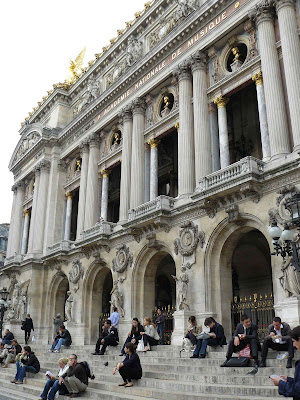 Speaking of lunch, we were getting hungry ourselves, so we decided it was time to find something to eat.  I had a spot in mind, not far from la Madeleine: 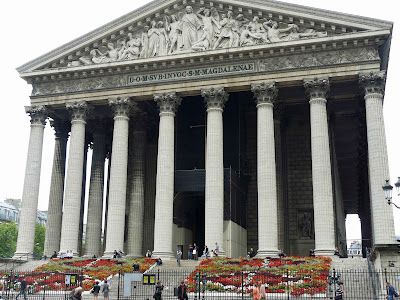 It's hard to go hungry anywhere in Paris, but the block surrounding la Madeleine is home to some particularly spectacular eateries.  Specifically, I was thinking of lunch at Fauchon.  Fauchon is internationally renowned as a high-quality gourmet food shop, selling jams and patés and coffees and vinegars and all manner of goods.  They also have an incredible pâtisserie that sells not only incredible sweet treats, but also all manner of beautiful savory versions of classic pastries (say, salmon eclairs with peas, or vegetable tarts).  And then, if that weren't enough, they also have a salon de thé serving some pretty fantastic lunch fare that features a number of the items they have for sale in the boutique.

We were seated in a pleasant outdoor terrace that was encapsulated in a clear plastic tent - quite lucky, given the on-again-off-again rain we experienced throughout the day.  My mom ordered a bowl of gazpacho, heady with the intensely fresh flavors of cucumber, green pepper, tomato, and a little kick of onion.  Its velvety texture was a perfect counterpoint to the crisp croutons served on the side.  For my part, I had the risotto aux cèpes et artichaux: 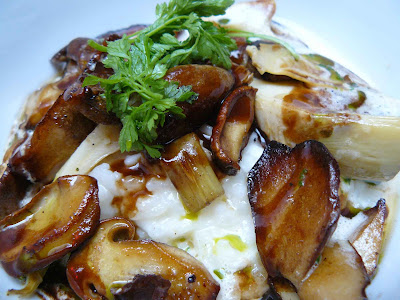 The rice was perfectly creamy with a tender chew, deep in flavor from mushroom stock, perhaps.  The cèpes, or porcini mushrooms, were beautifully caramelized the complemented the rice beautifully, and the pickled artichoke hearts were a lovely tart counterpoint to creamy richness of the rest.  All together in a perfect bite, the dish was creamy, toasty, and just a little acidic - complex and well-balanced.

The restaurant is on the second floor of the boutique, so after finishing our meal we headed downstairs to spend some more time shopping, for mustards and chocolates and teas.  When we finally tore ourselves away, it was only to head down the street to Ladurée for some macarons.  I had been told - and believed - that Pierre Hermé made the best macarons in Paris, but having never tasted those of the other macaron hotshot, we would need a taste test to be sure.  We picked up three macarons from Ladurée: caramel-fleur de sel, pistache, and fruits-rouges. 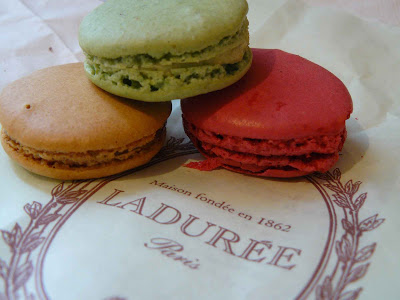 And then, of course, we hopped on the metro to head down to Pierre Hermé for a sample of his: jasmin, cassis, and vanille-huile d'olive. 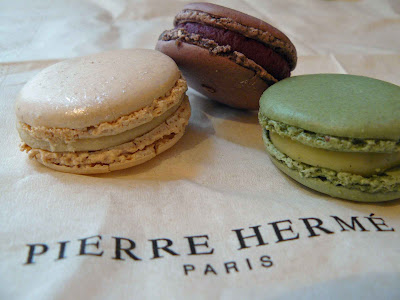 That evening and the next, we carefully tasted both sets of macarons.  While the flavors of each shop's macarons were bold and well-defined, the light, airy, delicately crisp texture of Pierre's made them the winners for me.  The classic vanille-huile d'olive (vanilla-olive oil, the green one on the right) was particularly excellent.

But there was no time for macaron tasting just then - we were off to the Tour Montparnasse, the only skyscraper in Paris.  I visited it first in 2008 on a tip from my friend Isabelle.  There are two ways up: one costs about 7 Euros just for the trip up the elevator; the other leads to a restaurant with mediocre but very expensive food and a stunning panorama of the city.  But it's open all day, and if you go at about 3-4 pm, a time when the French never eat out, you can order a drink and enjoy a table by the windows for an hour or two.  Sure, the drink may cost 9E, but the restaurant is empty and quiet and the view cannot be beat. 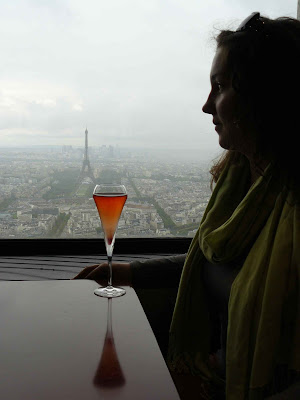 We arrived at about 3:30 and were immediately seated at an empty table just adjacent to the window.  My mom ordered a coffee, while I opted for an extremely photogenic kir, the classic apéro made with white wine and crème de cassis: 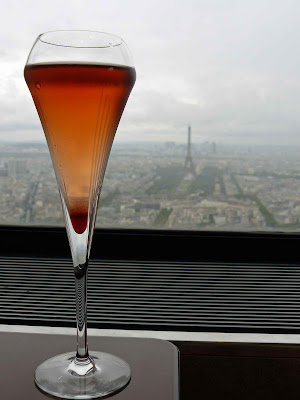 Later, my mom told me she hadn't been that enthusiastic about coming to the restaurant, but she changed her mind quickly when we stepped off the elevator and were greeted with this view: 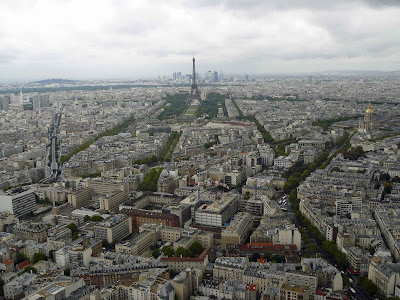 We stayed for maybe an hour or so, noticing different monuments and taking a ton of pictures over the city... and in the mirrors. 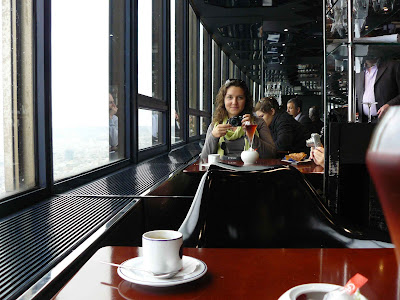 Eventually, we headed back out into the grey weather to walk through the 6th arrondissement.  On our way to the metro, we passed through the lovely jardins de Luxembourg. 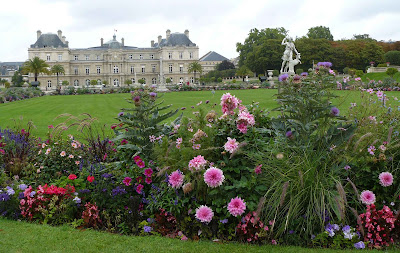 We went back to the hotel just long enough for a light dinner of Kayser baguette, yogurt, and fruit before heading getting back on the metro to head back across town and visit the Champ du Mars.  My mom had never seen the Eiffel tower sparkle in person, so we wanted to be there in time for the 9:00 show, just as soon as the sun had set and it was dark enough to watch. 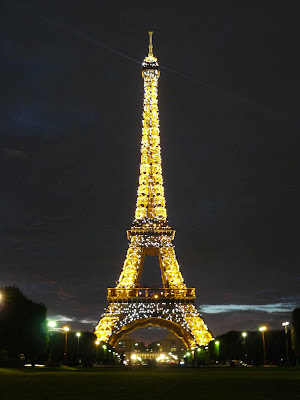 Seeing the tower sparkle was nice, but I enjoyed seeing my mom's reaction more: she lit up just like the tower, a smile beaming across her face, so happy to be there and to see the lights in person.  Going to school so near the tower, and becoming so accustomed to seeing it sparkle, I had forgotten how exciting it was when I first arrived in Paris.  It was wonderful to see how happy the tower made my mom.

After the ten minutes of sparkling, we took the metro back to the hotel for our dégustation des macarons.  Though we had a rough start with the narrowly missed train, it was a lovely day indeed.

Coming soon: Rouen, heart of Normandy, home of apples and cows and damage from the second world war.

Love your closeups of the flower from the passage garden, and the risotto (mmmmmm), and of the macarons (agreeing totally about Pierre, and about the olive oil one), and love your shot of les jardins de Luxembourg.

That really was an excellent day.